It is over twenty-two years since I first learned of...

It is over twenty-two years since I first learned of Christian Science through a friend, when I was suffering greatly from sciatica in the left hip and leg, and I had spent many weary months in sleepless nights because of the pain, This woman told me that her mother was a practitioner. I consented to have her pay me a visit in my home. We talked for about two hours, and she lent me the textbook, "Science and Health with Key to the Scriptures" by Mary Baker Eddy. As soon as she had gone I undressed, got into bed, and started reading. By the time I was half through the chapter on Prayer I fell asleep and had the most peaceful sleep I had had for months. I woke up in the morning entirely healed and went back to my work, which was of a heavy nature in the railroad shops. I have not had a return of the trouble to this day, but several other errors have crept in at times. Some of these I have been able to handle myself in accordance with the Bible injunction, "Work out your own salvation." This I have been pleased to do, and have found that God has worked with me. At other times I have had great help from practitioners.

In October, 1922, I was foreman on construction of a power transmission line. One day, during a slight fall of snow, I stepped on a rock, fell with my left foot doubled under me, and felt great pain in my ankle. Several of my men ran to help me, but I told them to leave me alone, for I was all right. I got to the bunkhouse and sat and worked in Christian Science until supper time, when I rose and walked to supper. In the morning nearly all the pain had gone, and I was able to go out again and walk several miles.

Send a comment to the editors
NEXT IN THIS ISSUE
Testimony of Healing
Permit me at this time testify to the healing power of... 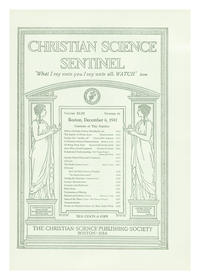