Immediately preceding the benediction at the conclusion of each Sunday service in a Christian Science church, we hear these assuring words: "The world knoweth us not, because it knew him not." The world—that material-mindedness which beholds only its own misconception of God's creation—is incapable of seeing or comprehending man, the son of God. Man, who is wholly spiritual, can be discerned only by God, and by the spiritual-mindedness which reflects God. This means that man is always beloved, rejoiced in, blessed, and approved by the only Mind that knows him. It also connotes man's complete safety, since carnal-mindedness, which is itself a delusion, cannot even see or think of the divine ideas and qualities which constitute man's being. Every thought included in spiritual consciousness originates in divine Mind. Man, the image and likeness of God, is not in matter, to be persecuted or condemned as a corporeal being. Individual spiritual man is not in matter to be attacked by material thought or material weapons. God's ideas, living, moving, and having their being in divine Mind, are known to God, beloved, cherished, and blessed; and all the sons of God behold one another in the Father's image, and live in spiritual co-operation, glorifying their creator.

Mary Baker Eddy, on page 503 of the Christian Science textbook, "Science and Health with Key to the Scriptures," writes that "the light of ever-present Love illumines the universe." Without this light of Love it is impossible to see spiritually. This is the reason why hatred, envy, condemnation, and lust are without vision; they are lost in their own darkness, since the absence of Love is the absence of light. We are told in the Bible of occasions when Jesus' enemies were not able to perceive him. His explanation of his unity with God and the immortality of his spiritual selfhood so antagonized his adversaries that they "took up stones to cast at him: but Jesus hid himself, and went out of the temple, going through the midst of them, and so passed by." His understanding of the very truths he had been expounding made it impossible for hatred to find him. Both Matthew and Mark tell us of instances when his enemies plotted to destroy him, and although Jesus withdrew himself from their sight, "great multitudes followed him." Their teachableness, their attraction to good, and their love of the truth he taught, gave them the light with which to see him, even when he was hidden from the enmity of his persecutors. Jesus in his Sermon on the Mount had taught, "Blessed are the pure in heart: for they shall see God." The purity of heart which gives the ability to see God brings with it also the ability to see the Godlikeness expressed by men, and to understand and love it. 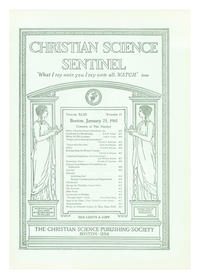