In a middle western city a large public building was under way. Old structures were razed and shafts sunk into the earth down to solid rock for the foundation. Months passed in this preliminary work with nothing to show above the ground. Passers-by finally had begun to remark about the lack of progress when, one day, the last pier was finished and the steel bases were secured in place. Then, to the watchers, it seemed as if there had been a sudden awakening, for the giant columns were installed rapidly and the steel structure very shortly could be seen towering above the sidewalk. This progress was continuation of the work which had been carried on through many previous months, but the visible structure could appear only after the long preliminary work.

Christian Scientists sometimes grapple with problems without seeing any tangible results for some time, and it may seem that because progress is in some manner delayed the results are being withheld. However, when the work is properly performed and carefully continued, there should come a clear realization of man's perfection as God's likeness and of God's unfailing power, shown in the subduing of the error. Although it may appear that this awakening is sudden, yet, as in the case of the public building, the results were under way from the very outset. Sometimes there are habits and false beliefs of long standing to be cleared away, which the student has been reluctant to give up. New methods of thinking must replace old fears and selfishness. Erroneous beliefs must be replaced by correct understanding, and false concepts banished. 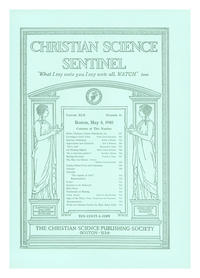