In a challenging sermon preached at St. Peter's-in-the-Forest Church...

In a challenging sermon preached at St. Peter's-in-the-Forest Church, the preacher called on his congregation for more devoted service to the cause of Christianity, bidding them to have greater consecration to the cause of Christ. He then singled out Christian Science as if it were a deterrent to Christianity, when, as a matter of fact, Christian Science demands that very consecration to Christ which the preacher advocated. Christian Science is awakening Christians to admit the long neglect of practical Christianity. For centuries Christian ministers have evaded the command of Christ Jesus to heal the sick, raise the dead, and cast out demons, but Christian Scientists, planting their standard on the rock, Christ, are enabled in the measure of their understanding to obey these commands and demonstrate the power of Truth today as conclusively as it was done in the first century. Remarkable healing of sickness and sin follows an obedience to Christ Jesus' command, and healing is one of the factors which accounts for the growth of Christian Science.

The Christian Science church was organized and "designed to commemorate the word and works of our Master," and intended to "reinstate primitive Christianity and its lost element of healing" (Church Manual by Mary Baker Eddy, p. 17 ). Ministers of religion will do well to study the subject of Christian Science impartially, and be open-minded enough to awaken their hearers to the original and vital Christianity which Christian Science proclaims. Mrs. Eddy says on pages 149 and 150 of "Science and Health with Key to the Scriptures," "To-day there is hardly a city, village, or hamlet, in which are not to be found living witnesses and monuments to the virtue and power of Truth, as applied through this Christian system of healing disease."

Send a comment to the editors
NEXT IN THIS ISSUE
Article
In a recent issue a reference was made to Christian Science... 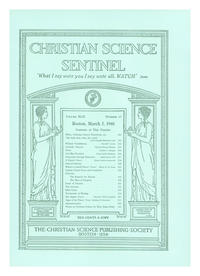