Many at the beginning of their study of Christian Science make rapid spiritual progress. They see the truth clearly, the truth of God's allness and the entirely spiritual nature of His universe, including man; and with this spiritual vision, they are able to make many demonstrations over material sense—demonstrations of the healing of disease and of the overcoming of sin, sorrow, lack, and the like. Not infrequently, people are healed in Christian Science of what is regarded as incurable illness, at the very beginning of their study, having vividly perceived the unreality disease through their perception of the allness of God, good. But, too often, the clear, spiritual vision appears to fade, faith in revealed spiritual truth and its power to heal grows dim, with the result that spiritual progress is retarded.

That ought not to be: progress in spiritual understanding and demonstration should be continuous. The genuine student of Christian Science is aware of this; and when he feels that he is not progressing as he should, he examines his thought to find out what is wrong. Never can the Christian Scientist dispense with self-examination, for thereby he ascertains where he stands spiritually—where his affections are placed, to what extent he is realizing the truth of God's allness and omnipotence, how much he is giving presence and power, in belief, to evil. Frequent self-examination, in the light of revealed truth, is necessary; for without it the student may fail to uncover and to overcome the hindrances to his progress spiritually. 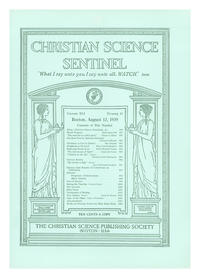