A great and joyous fact lying behind the return of the prodigal son to his father, as recorded in the fifteenth chapter of Luke's Gospel, was that never once had the father relinquished his love for his son. From the moment his son departed to the moment when he beheld him "a great way off," and ran with joy to meet him, the father's love remained unchanged. The materialism, which never had been real, was broken down, and the union between them, which never had been really severed, was restored.

In the Christian Science textbook, "Science and Health with Key to the Scriptures" by Mary Baker Eddy, we read (pp. 476, 477): "Jesus beheld in Science the perfect man, who appeared to him where sinning mortal man appears to mortals. In this perfect man the Saviour saw God's own likeness, and this correct view of man healed the sick. Thus Jesus taught that the kingdom of God is intact, universal, and that man is pure and holy." 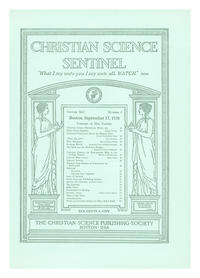