In the Preface to "Science and Health with Key to the Scriptures" Mary Baker Eddy writes (p. vii), "To those leaning on the sustaining infinite, to-day is big with blessings." Many people reading these words may find themselves doubting that this period of the world's history can contain days or even moments "big with blessings." Throughout the world there seem to be confusion and mistrust, war and rumors of war, "men's hearts failing them for fear." And certainly if one looks for matter or materiality to be "big with blessings," disappointment is the result.

Men have supposed that what they saved in one year would have much the same purchasing power in the following year. Many people in all lands have put by for a rainy day, and in consequence have felt less fearful of the coming of what was described as "old age," and the future of dependents. The possessors of material things have felt a greater sense of security. But today the most optimistic citizen is forced to admit that the bottom has fallen out of these things, their value being more and more at the mercy of speculation, uneasy markets, and vagaries of fashion. And so in bewilderment one looks around for something that is secure, that does not rock with every wind of fear and rivalry, and unless he seeks it in God, he finds nothing. 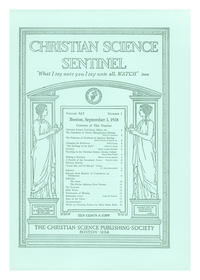