The three heartening words comprising the title of this article are used occasionally in the Bible and are rich in their promise of unlimited good. Most of the promises in Scripture, however, have a condition attached to them. Our heavenly Father has promised us freedom from fear, immunity from sin, sickness, and death, abundant supply of all things needful for our peace and harmony in our daily experience, and immediate fruitage, as the conditions enjoined are faithfully complied with.

When the so-called depression first began to be so generally talked of, one student of Christian Science clung persistently to the Scriptural promise, "They shall be abundantly satisfied with the fatness of thy house; and thou shalt make them drink of the river of thy pleasures." During the months and years that followed there was no lack. On the contrary, there was more material supply than in previous years. This successful protest against depression proved conclusively the truth of the words of our beloved Leader, Mary Baker Eddy, on page 384 of "Science and Health with Key to the Scriptures," where, in speaking of our incurring "the penalty through matter," she states significantly, "This is but a belief of mortal mind, not an enactment of wisdom and man has only to enter his protest against this belief in order to annul it." 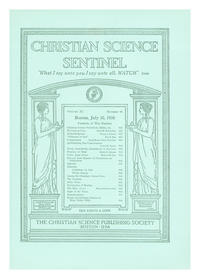