"The Lord hath brought forth our righteousness" (Jer. 51:10)—It may be noted that the word "tsedakah," here rendered "righteousness," can also mean "vindication, justification," "righteousness in a case or cause" (Brown, Driver, Briggs: Hebrew Lexicon, p. 842). As a consequence, one might well render: "The Lord has proved our innocence." Smith has it: "The Lord had vindicated our rights;" and Moffatt: "The Eternal has made good our cause."

"In the beginning was the Word" (John 1:1)—The Greek term "Logos," which is translated "Word" in this and the following verses, can be used with reference either to speaking or to thinking; and so it can mean either "word" or "reason." Among the Greek philosophers and others, "logos" was constantly used in the sense of "reason," while in the Septuagint (or Greek Version of the Old Testament) we find that it was by the Logos (the Word or Reason) of God that the heavens were made (Ps. 33:6), while in Psalms 107:20 we are informed that God "sent his word [his 'Logos'] and healed them." It is of interest to note that those who prepared the targums (or Aramaic paraphrases of the Old Testament) constantly substituted the expression "the Word of the Lord" for the terms "the Lord" or "God"—as in Genesis 3:8: "They heard the voice of the Word of the Lord God walking in the garden" (Etheridge: Targums of the Pentateuch, Vol. I. p. 40). It is now generally agreed that this usage helped to prepare for the idea of the Logos or "Word" as a mediator between God and men (of. Plummer: St. John, p. 61). Commentators contend that the primary meaning of "Logos" as John employs it in chapter 1 of his Gospel, is "Word" rather than "Reason" (see Thayer: Greek Lexicon, p. 382); while in commenting on this passage, Loisy holds that "the word is not the Reason of God ... but, if one may say so, the Expression of God" (l'expression de Dieu). (Le quatrieme Evangile, p. 152.)

Send a comment to the editors
NEXT IN THIS ISSUE
Testimony of Healing
I am very grateful for the benefits which I have received... 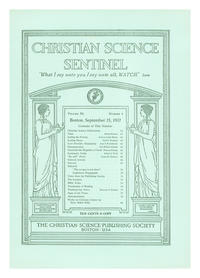