Flora Haaf with contributions from Helena A. Haaf

I wish to express my gratitude for the many blessings received since I was healed through Christian Science.

When I was healed through its power, I knew nothing of its Principle except that it claimed to heal. I knew nothing of Mrs. Eddy, its Discoverer and Founder, and did not know any Christian Scientists. I was then living in a small town in Iowa where there were no Christian Scientists. I cared for my mother during her last illness of ten months' duration, and most of that time she was in bed and needed much care. For a number of years previous to her illness and passing on I had had poor health; after this I constantly feared I should have the same dreaded disease, which materia medica calls incurable.

Send a comment to the editors
NEXT IN THIS ISSUE
Testimony of Healing
Twenty years ago I became interested in Christian Science... 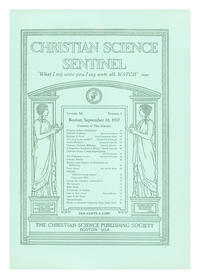