"Which were born, not of blood, nor of the will of the flesh, nor of the will of man, but of God" (John 1:13)—Modern translators have made various attempts to clarify the sense of this passage. Thus Moffatt has: "Who owe this birth of theirs to God, not to human blood, nor to any impulse of the flesh or of man;" Goodspeed: "Owing their birth not to nature nor to any human or physical impulse, but to God;" and the Twentieth Century New Testament: "Not to natural conception, nor to human instincts, nor to the will of man did they owe the new Life, but to God." Weymouth suggests: "Who were begotten not by human descent, nor through an impulse of the flesh, nor through the will of a human father, but from God."

Send a comment to the editors
NEXT IN THIS ISSUE
Testimony of Healing
A dictionary defines "gratitude" as "an appreciation of... 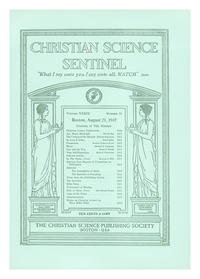