Some years ago two students of Christian Science were walking along a street in a busy manufacturing city. The rain was pouring down, the pavement was muddy, and the atmosphere seemed unfriendly. One of them broke the silence by saying, "We don't live in this, you know!" Though material sense seemed to force upon them the acceptance of unpleasant conditions, they could realize at once the true state of harmony to which Mrs. Eddy refers when she says, "This kingdom of God 'is within you,'—is within reach of man's consciousness here, and the spiritual idea reveals it" (Science and Health with Key to the Scriptures, p. 576). They finished their walk in rejoicing and gratitude for this truth, and the rain and discomfort were forgotten.

In tropical countries the hot weather is feared, and human beliefs about it are many and distressing. These should, however, be persistently denied as unreal, without power to harm. No matter how insistently the error strives for recognition, it can be put to flight by the realization that we are in reality living now in the kingdom of heaven, which our Leader defines in part (ibid., p. 590) as "the reign of harmony in divine Science; the realm of unerring, eternal, and omnipotent Mind." 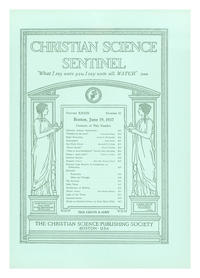