It is with a heart filled with gratitude that I present...

It is with a heart filled with gratitude that I present this testimony. Before I became studious in my pursuit of Christian Science, the thumb on my right hand was broken while I was playing ball on a sand lot. I paid very little attention to it during the remainder of the game, and when I reached home late in the afternoon my wife did the best she could in setting and bandaging it. I was working nights at that time, and while occasionally the thumb was painful, yet I lost no time from my work. But there was a peculiar feeling in this thumb most of the time, so I knew it was not set right. About fifteen years later this same thumb was broken again. In the meantime I had taken up the study of Christian Science in earnest, and had been studying for about eight years. When this second accident occurred I relied absolutely on Christian Science, went to my books, and also asked for help from a practitioner, and in less than thirty minutes I was completely healed and have experienced no pain or discomfort from this condition since. This is only one of many healings I have experienced over a period of nineteen years since taking up the study of Christian Science.

I had two other instantaneous healings of broken bones, and have been healed of influenza, smallpox, stomach trouble, and blood poisoning in its worst form.

Send a comment to the editors
NEXT IN THIS ISSUE
Testimony of Healing
With gratitude to God and to Mary Baker Eddy, I wish... 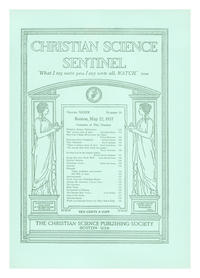