Over nineteen centuries ago there was enacted the greatest drama which has ever taken place in the history of mankind. Of the actors in this drama, the central figure alone clearly comprehended the terrific mental forces let loose, and the far-reaching effect on human history of a certain event. Jesus, the great demonstrator of Spirit, was arraigned before the bar of the carnal mind's hatred of Truth.

Later, in his resurrection, Jesus proved for all time that Life is Spirit, and that hate is powerless before the spiritual forces of divine Love. He proved for all mankind in every age that Truth and Life, understood and lived, heal the sick, reform the sinner, and raise the dead. 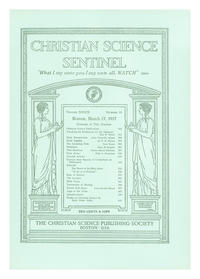