A student of Christian Science was enjoying the most important basketball contest of the season. At one point in the game, when an opposing player was making a free throw, this student joined in the shout, "You can't make it!" Earlier in the game, when a home-team player had been in the same situation, the Scientist had declared silently to herself that all activity is perfectly co-ordinated in divine Mind, and that the true man reflects this unerring precision.

Now, as she joined in the shout, "You can't make it!" it suddenly occurred to her that she was indulging in a form of malpractice, for she was mentally arguing "in a manner that can disastrously affect the happiness of a fellow-being,"as Mrs. Eddy says in "Miscellaneous Writings" (p. 31). She knew that in order to progress in the ability to do good in the world she must be consistent, and argue in every case on the side of good alone.

Send a comment to the editors
NEXT IN THIS ISSUE
Article
A statement from a bulletin of the Associates in the... 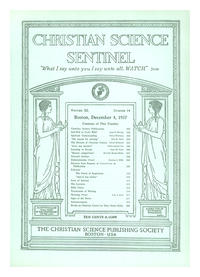