The student of the Scriptures is impressed by the extraordinary assurance which characterized the words and works of Christ Jesus. With him there was no slightest trace of uncertainty as to the facts about God, his Father, about man, and man's relation to the Father; nor as to the utter falsity of the material phases of existence which he constantly encountered. He knew the truth, and he proved that this knowledge sets humanity free from restricting and inharmonious conditions of whatsoever name or nature. His was the knowledge which, supported by demonstration, becomes scientific certainty.

The Christian who accepts Jesus as Lord and Master, as Way-shower and Saviour, usually searches diligently for the reasons for the perfect assurance manifested in the career of this man of Galilee. What was the source of his assurance of the divine presence, assurance which never wavered? What enabled him to face the most threatening of situations, even to surrender himself willingly to his enemies, whose purpose was, as he knew, to destroy him? What was it that took him through the terrible experience of the cross but that scientific knowledge of God, of man and the universe, which revealed Life to be indestructible? 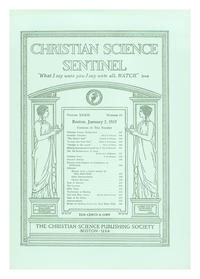