Through Christian Science I was instantaneously healed...

Through Christian Science I was instantaneously healed of a severe attack of poisoning. The attack came on one Sunday evening in a Christian Science church, and at the end of the service I was feeling very ill. I had to hold on to the chair in front of me in order to stand up, and could not see sufficiently clearly to read the hymn numbers a few yards away from me. After the church service I managed to reach my motor bicycle, and stood holding on to this and wondering how I was going to proceed, for I felt entirely unable to ride.

Mrs. Eddy says in Science and Health (p. 393), "Man is never sick, for Mind is not sick and matter cannot be." I had been trying to know, and had declared, that man in God's image and likeness was not liable to suffer in this manner, but I seemed to lack the effort necessary to claim my healing. At that moment I saw walking out of church a man from the naval barracks at which I was then serving. This was the first time I had seen interest taken in Christian Science by any of the men at this barracks, and I felt I must go over to him and speak a word of encouragement. As I let go of my bicycle with this intention I ceased thinking sick thoughts about myself and the truth I had declared became realized. Every evidence of poisoning left me and I was absolutely well. Remembrance of the immediate relief from all pain which I experienced at the moment of turning my thought away from myself towards helping another in Christian Science has always been a great help and encouragement to me.

Send a comment to the editors
NEXT IN THIS ISSUE
Testimony of Healing
With a grateful heart I offer my testimony regarding... 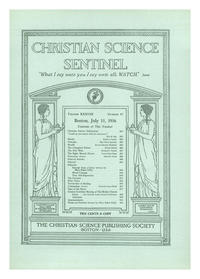