It was in the way of Christ's appointing that I was led...

It was in the way of Christ's appointing that I was led to the study of Christian Science. Two Christian Scientists, who lived in our home a few months during the World War, let their light so shine that we saw their good works and were so attracted by the loveliness of that which inspired them that we wanted to know what it was and whence it came.

The first healing in our home was of our eight-year-old boy, whom measles had left with a persistent racking cough. The physician who had attended him said there was no remedy, that the cough would have to wear itself out. For two days and nights the child was shaken with incessant spasms. Then a Christian Science practitioner was called, one treatment was given, and the healing came. He slept quietly and the next day was dressed and out playing in the sunshine. Some time after this I procured a Christian Science Quarterly and began faithfully to study the Lesson-Sermons.

Send a comment to the editors
NEXT IN THIS ISSUE
Testimony of Healing
It has long been my desire to express my gratitude for... 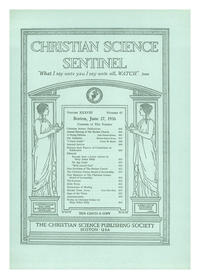