It may be said that a student of Christian Science does not outline, but that he makes well-considered plans which he earnestly strives to have God-governed as they progress and unfold. A nationally known sales executive of a large American merchandise house once told the writer that the greatest difficulty he had in securing the right type of men to start at the bottom of his business, was lack of definiteness of thinking on the part of most of the young men who applied. He said that when he asked them why they wanted to work for his house they had no clear, well-thought-out answer; they did not seem to know what they were aiming at in their lifework. Their usual reply was, for example, that they had long heard the house was known to be one fair and just in its dealings with its employees, was a business success, and was the kind of house with which they would like to be associated.

Occasionally, a young man would appear who had carefully analyzed his abilities, aptitudes, and special qualifications; who had planned his school and college work with the idea of developing these qualities, so that now he was ready to put them to work in a position in business life where he could make the most of them. Such a man was usually just as eager to form an estimate of the firm to which he was applying as he expected the firm would be desirous of carefully appraising his worth and possibilities. One such young man, after calling on several concerns and presenting his qualifications in this definite, well-considered manner, found himself with three positions open and available, all of them with firms of the highest rank. His work then was to select the one which he felt would give him the best chance to serve and succeed. 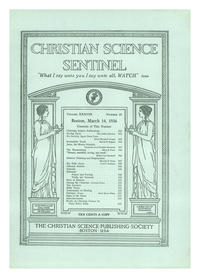