Over eighteen years ago I began the study of Christian Science...

Over eighteen years ago I began the study of Christian Science for physical healing only. For a number of years I had been a semi-invalid, suffering from heart trouble and nervous chills. I was very much underweight, spending most of the time in bed, growing worse and receiving no help from doctors. I wanted to be well, and so studied constantly. As I continued the study of the Bible and of "Science and Health with Key to the Scriptures," in connection with the other writings of Mrs. Eddy, my eyes were opened. The desire to learn more of God became greater than my longing to be well. I ceased looking to the physical body for health and happiness and was healed through consecrated study. For many years I have found joyous activity in the Christian Science movement, which was established through the inspiration, love, vision, and unselfishness of our revered Leader.

During this time I have relied entirely on the truth as taught in Christian Science, and have had many healings. Recently I fell down a flight of stairs in an office building. My head was cut, my ankle was sprained, and there were several bruises. These words from our textbook came to me (p. 419): "Meet every adverse circumstance as its master." Through a realization of God's presence and of man's God-given dominion, I was able to rise and continue the business which I had set out to do. In a few days there was no trace of the accident except a mark on my forehead, which disappeared shortly.

Send a comment to the editors
NEXT IN THIS ISSUE
Testimony of Healing
"The years that the locust hath eaten" truly have been... 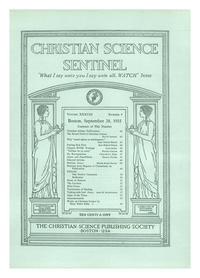