Tenderness is sometimes thought of as weakness, effeminacy, lack of manliness. But is it? Christ Jesus, the greatest of all men, surely could not be considered weak or lacking in manliness. Behold how ineffably tender he was as he went about his mission, healing the sick, raising the dead, and casting out demoniacal obsessions or evil spirits, as they are referred to in the Bible. But when it was meet that he rebuke error in any form, he did it fearlessly and strongly. He whipped the money changers out of the temple with little waste of words or action, and then tenderly healed the infirm and sick. Surely there was no emasculation there.

Jesus was always tender, even when there was no receptive heart to understand his tenderness. He was always gentle, kind, and understanding. It was his understanding heart that made him gentle and kind. It was with tender understanding that he did his great and mighty works, and his tenderness was greater than the circumstance. Hence, even when he was on the cross, he beckoned to John, the beloved disciple, and lovingly said, "Behold thy mother!" Thus he saw to it that his mother would be lovingly cared for. Paul also was mindful that men needed to be more tender one to another, to be more kindly considerate of one another. Hence he wrote to the Ephesians, "Be ye kind one to another, tenderhearted, forgiving one another, even as God for Christ's sake hath forgiven you." 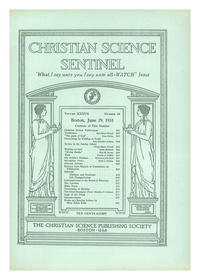