The Record of February 24 quotes a member of the...

The Record of February 24 quotes a member of the faculty of Moravian College for Women, at Bethlehem, as saying that modern "pow-wow" doctors "simply use the power of suggestion just as do practitioners of Christian Science."

Kindly permit me to say that suggestion does not enter into the practice of Christian Science. Any assertion to the contrary is simply an unwitting admission that spiritual truth is not understood by the writer. If it were, he would not think of employing suggestion as a remedy. Anyone can use suggestion, but no one can practice genuine Christian Science without understanding that spiritual truth is scientific fact, which operates as such in human consciousness to dispel the illusion of false belief.

Send a comment to the editors
NEXT IN THIS ISSUE
Article
The station announcer said: "Good afternoon, ladies and... 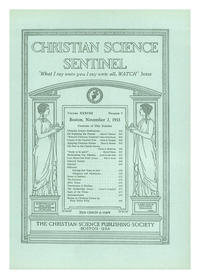