Now and then Christian Science churches in the United States hold services at Civilian Conservation Corps Camps, and with success. Two churches in western Massachusetts have alternated in doing this at a near-by camp. At the first service about fifty boys came from their tents and listened with pleasure. Some had never heard a Christian Science service before, some asked when the Readers would come again, while one said a great many of the boys felt they should attend a church service every Sunday. In California, upon receiving an invitation to hold Christian Science services at a camp twenty miles away, a Christian Science society sent Readers, who took a few copies of the Christian Science Hymnal and of the Quarterly. The books were not nearly sufficient for the number who were eager to participate in the singing and responsive reading, "but the boys huddled in bunches and did very well indeed. The attention was perfect and quiet prevailed." Thanked for coming, the Readers were asked when they would come again; and they left, feeling well repaid for the effort, and knowing that the boys interested in Christian Science had been strengthened, and the others had heard some new and usable truths.

Send a comment to the editors
NEXT IN THIS ISSUE
Article
Articles, Poems, and Testimonies 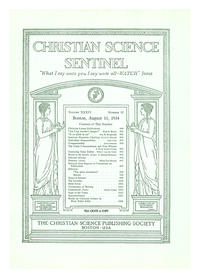