No Compromise with Matter

One method of settling disputes in human affairs is by way of compromise. Rather than prolong an argument in which neither side will entirely yield, each makes some concession to the other. This is often felt to be the happiest way out of a difficult situation. It is a question, however, whether this mode is entirely desirable. The quick settlement of a dispute is, of course, always to be looked for; yet the means to this end should be carefully studied. The only basis for procedure which will recommend itself to the student of Christian Science is that of divine Principle; and if it appears that a departure from Principle is necessary to effect a compromise, then without doubt it should not be made.

To one working out a problem in mathematics it is clear that deliberately to ignore the rules governing numbers means to invite trouble. And it should be equally plain to the student of Christian Science that to turn from divine Principle is to court difficulty and lose the protection which obedience to it insures. Thus it will be seen that the act of giving way to mistaken arguments merely to effect a settlement of a question does not settle it at all. In other words, the difficulty has not been mastered. Overcoming through the truth is what is required in Christian Science. Our aim is not merely to get rid of troublesome problems because they are troublesome, but to eradicate the supposititious causes which are operating in belief, and thus ascent a point in the scale of spiritual understanding. 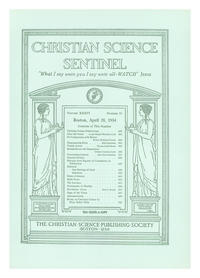