In the November 29th issue of the Star and Herald, there...

Mrs. Nannie I. Brown, Committee on Publication for the Canal Zone,

In the November 29th issue of the Star and Herald, there appeared an article which stated: "Formal Christianity has collapsed. Its days are numbered. Its adherents have become divided into innumerable new sects. Spiritualism, newthought, Christian Science, and the like—each of which has all but denied the teachings of the church, and has adopted beliefs which, generally speaking, are of Islamic origin."

Send a comment to the editors
NEXT IN THIS ISSUE
Article
The report on the conference of clergymen in the Basler Nachrichten... 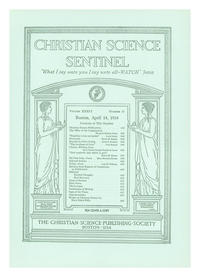