In the final article of the series which appeared in the...

In the final article of the series which appeared in the Express and Star, "The Christian Faith and Spiritualism," the writer makes the statement that the Christian Science movement is carrying away numbers of Christians from the fundamental teaching of the early apostolic church.

On the contrary, Christian Science is restoring to many thousands of Christian people an understanding of primitive Christianity and spiritual healing, as taught by its Founder, Christ Jesus.

Send a comment to the editors
NEXT IN THIS ISSUE
Article
In the course of his remarks Mr. Gibbons said:—... 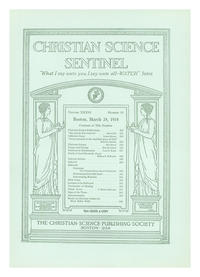