In the first epistle of John we read these inspiring words: "Behold, what manner of love the Father hath bestowed upon us, that we should be called the sons of God. ... Beloved, now are we the sons of God." Jesus knew himself as the child of God. He identified himself with the Christ, and Jesus Christ is spoken of in Hebrews as "the same yesterday, and to day, and for ever." The Master knew the truth about man as an established fact; he knew it irrevocably. He knew it not only for himself, but also for others. In "Science and Health with Key to the Scriptures" by Mary Baker Eddy we read (pp. 476, 477), "Jesus beheld in Science the perfect man, who appeared to him where sinning mortal man appears to mortals."

Christ Jesus spoke with authority, and he proved his identity as the Son of God by the power which he used to eliminate whatever bore false witness to the truth. We, also, must see man's true relationship to God, both for ourselves and for others. Like Jesus, we must see it as an established fact, not as a past condition from which men have fallen, a present which quickly fades away, or a hoped-for future possibility. Man's relationship to God is not a potential or merely possible state of being, but an ever present actuality, which can neither be changed nor lost. 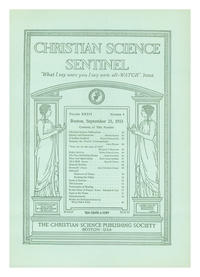