This lecture hall is used by various religious denomination, many of which have exhibits in the Hall of Religion, where the Christian Science church maintains a booth. To those who feel that interest in religion is waning, it may be significant to learn that about ten thousand people pass through the Hall of Religion and examine the various religious exhibits daily. At the booth maintained by the Christian Science church, courteous attendants are ready at all times to answer questions about the Christian Science literature which is displayed and which may be purchased there. The item in the exhibit that attracts most attention is a glass case at the entrance which contains the Bible and Science and Health opened to corresponding passages defining "I Am" (see page 588 of Science and Health). It is reported that a large number of young people enter the Christian Science booth and earnestly read some of the texts displayed in the cases or on the walls. 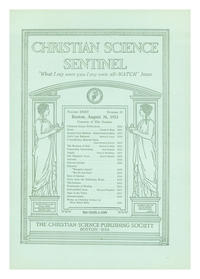