TRUE progress is the measure of one's understanding of God and of His unchangeable spiritual laws, which govern the universe, including man. According to the world's standard, progress is indicated mainly by mechanical inventions and material wealth, improved living conditions, and the advancement of the arts. These material developments, indicating progress, are but symbols of the unfolding divine intelligence that is ever present. The maxim, "There is no new thing under the sun," is generally accepted by the world; yet how quickly one takes credit to one's self for creating something new! All that anyone ever has done or ever can do to augment the genuine progress of the world is to open his consciousness to the ever present truth about God and His good creation.

A great deal is heard these days about the tremendous progress of the world during the past century. Some men claim that one of the causes of what inventive genius in the mechanical world has surpassed the achievements in the fields of economics and politics. Though such may seem to be the case, is the solution of the problem to be worked out merely through some new economic system? Economists do not agree as to what is the ideal economic scheme; and why? The answer to that question is made clear in the light of divine Science. Men have only faintly perceived the truth of the spiritual universe; and, until they more fully comprehend God's unchangeable law, they cannot realize perfection in the economic government of the world. As mortals approach Truth, differences of opinion concerning fundamental facts disappear into nothingness before the understanding that there is but one Mind, or God. 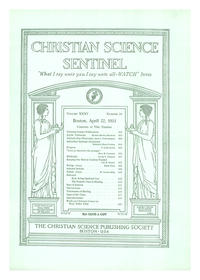