In your issue of March 17 a correspondent attempts to...

In your issue of March 17 a correspondent attempts to enlighten the public on Christian Science. He takes issue with the word "Science." What does this word mean? Science is defined as systematic, formulated, demonstrable knowledge, correcting the evidence of the five physical senses. Christian Science corrects opinions about life and brings the recognition that "all is infinite Mind and its infinite manifestation" (Science and Health with Key to the Scriptures, by Mary Baker Eddy, p. 468). Whoever will study the above-mentioned textbook without prejudice will be enlightened on the difference between Christian Science and what is commonly called faith healing. Christian Science is gaining its many adherents because it has healed cases of sickness in large numbers. The healings accomplished through it are the signs of which the Bible speaks: "And they went forth, and preached every where, the Lord working with them, and confirming the word with signs following." Jesus said: "He that believeth on me, the works that I do shall he do also; and greater works than these shall he do." 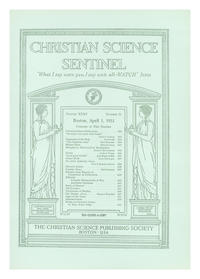