Growing Our Own To-morrow

The individual who turns to Christian Science for healing does not at once perceive the magnitude this new-old religion will assume in his daily life. He may be aware of a great need for healing, either moral or physical, but not fully aware of his shortcomings. One who once went to a Christian Science practitioner for help said, in all sincerity, that she had only one fault! She wished to be healed of that one fault—jealousy—but otherwise felt that she was living a perfectly proper life. After some study she found that there were many thoughts in her heart that needed correction. Brought up in a sheltered Christian home, sin, in her vocabulary, had been confined to such moral offenses as those for which people are sent to prison.

Every Christian Scientist knows that he is better than he formerly was; and he is very grateful as he sees wrong thoughts and fears and doubts uncover themselves and fade away as he learns more and more of spiritual dominion. As he joyously strives to realize his divine sonship, his effort is rewarded by increasing illumination. The works of Mary Baker Eddy are replete with thought-arresting statements of Truth which are daily turning the thinking of thousands of seekers into constructive realization. Thus, gradually, thought is renewed and character transformed. 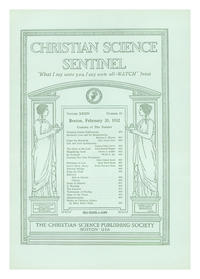