Your issues of January 7 and February 13 contain...

Your issues of January 7 and February 13 contain articles which discussed Mary Baker Eddy and the religion she founded. They contain some statements which undoubtedly will mislead any of your readers who may not be informed about Christian Science.

While the statement that Mrs. Eddy was succeeded by Madame Besant, the noted English theosophist, undoubtedly was intended as a humorous remark, still it is entirely possible that some of your readers who have recently come to this country from parts of Europe where Christian Science is not so well known, might accept the statement seriously. Madame Besant was a lifelong theosophist; she was never in any way associated with Christian Science or its Discoverer and Founder. As is well known, the Christian Science movement is being carried on by The Mother Church, The First Church of Christ, Scientist, in Boston, Massachusetts, together with its more than twenty-five hundred branches throughout the five grand divisions of the globe.

Send a comment to the editors
NEXT IN THIS ISSUE
Article
In the Christian Science textbook, "Science and Health with Key to the Scriptures"... 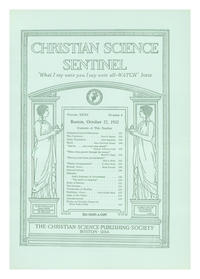