Your issue of February 20 contains a report of a sermon...

Arthur J. Chapman, Committee on Publication for the State of Louisiana,—Baton Rouge

Your issue of February 20 contains a report of a sermon by an evangelist on the subject of the raising of Lazarus, in which reference is made to Christian Science as follows: "The Christian Scientists say that Lazarus was never dead, but was merely in a state of coma. Christian Science is neither Christian nor scientific. Their idea makes Christ a party to deception, sham, and fraud."

Kindly permit me to state that Christian Scientists do not say this. It would have been an easy matter for our friend to have quoted what Mrs. Eddy really said on the subject, and if he had done so his hearers would have been correctly informed.

Send a comment to the editors
NEXT IN THIS ISSUE
Article
Your last two issues have contained excerpts from lectures... 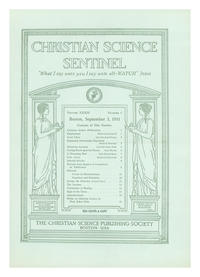