How unfailingly is a Christlike action recognized and remembered! After the lapse of many years one such incident stands out vividly in the memory of the writer.

An exceedingly unjust, unfair, and discourteous demand, which he had no power to enforce, was made by one man upon another. The other, a Christian Scientist, instead of resisting the demand, evading it, trying to make terms regarding it, or even remonstrating, simply complied—willingly, cheerfully, lovingly—with a complete absence of any sense of ill usage. An awkward situation was thereby redeemed, and this instance of obedience to the command of Jesus, "But I say unto you, That ye resist not evil," survives in the thought of the single bystander as a rebuke and an inspiration. According to mortal standards it would have been pardonable to refuse the request, or at least to take the superior attitude that rather than dispute one would do what was asked. The manner of compliance was everything. Its good humor and graciousness, its absolute unawareness of injury, illustrated true forgiveness, and could have proceeded only from the recognition of there being in truth but one service, and that the service of God.

Send a comment to the editors
NEXT IN THIS ISSUE
Article
In your issue of the 14th, the Bishop of Gloucester is... 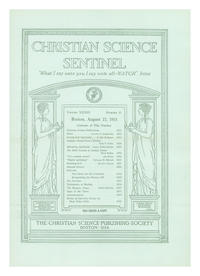