The report of the sermon by a clergyman at the Brick...

Orwell Bradley Towne, Committee on Publication for the State of New York,

The report of the sermon by a clergyman at the Brick Presbyterian Church, published in your issue of July 18, gives a wrong impression regarding Christian Science which I would appreciate space to correct.

Our friend criticizes Christian Science for "pretending to abolish the physical side of life." Why should Christian Scientists be criticized for arriving at the same conclusion, through spiritual reasoning and demonstration, regarding matter and physicality that has been reached through mathematics and the natural science by men like Professor Eddington of Cambridge University, England, as stated in his books entitled "The Nature of the Physical World" and "Science and the Unseen World." The same conclusion was reached by Lord Balfour, when president of The British Association for the Advancement of Science, and by Professor Haldane of Oxford.

Send a comment to the editors
NEXT IN THIS ISSUE
Article
As reported in your issues of a fortnight ago, a bishop,... 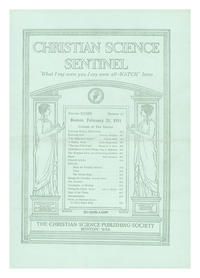