Christian Science turns the searchlight of Truth on all human frailties, and reveals to the honest student the defects in his own mentality, which do not belong to the true idea, man, as God's reflection. Mrs. Eddy writes in "Miscellaneous Writings" (p. 154), "Never desert the post of spiritual observation and self-examination." The hindrances to a student's spiritual progress are probably in his own false thinking; and throughout her writings she uncovers the subtle workings of mortal mind, thus instructing the student how to detect the false beliefs which are hindering his spiritual growth, and eliminate them. When self-examination is accompanied with humility, with the pure desire for holiness, the errors of mortal sense are uncovered, seen as nothing, and so destroyed.

Sensitiveness is often accompanied by pride, in the form either of self-depreciation or of self-glorification, extremes of the same false belief in existence apart from God. A young girl once prided herself on being very susceptible to certain impressions. For instance, certain music so wrought on her sensibilities that she could not bear to hear it played; and there were certain notes of the violin which affected her to tears. But after she became a student of Christian Science she began to recognize that such susceptibility was far from being true sensitiveness. The teachings of Christian Science revealed the necessity of being more sensitive to the things of Spirit, and it was seen that the demonstration of Christian Science demanded the cultivation of spiritual perception. Spiritual man gains his impressions through spiritual sense, not through the material senses; and as spiritual sense is cultivated, the nothingness of matter and of material sensation is proved. 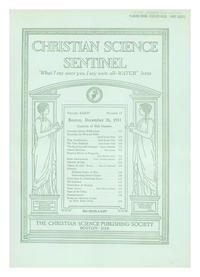