It is gratifying to find such a broad-minded and fair attitude...

Frank C. Ayres, Committee on Publication for the State of Indiana,—South Bend

It is gratifying to find such a broad-minded and fair attitude as that expressed by a rabbi in his discussion of Christian Science and its Discoverer and Founder, Mary Baker Eddy, a report of which was published in your issue of March 10. He has given your readers a wrong impression, however, regarding some of the teachings of Christian Science.

Judaism and Christian Science are alike in desiring to relieve the world of its sin, sickness, limitation, and suffering of every kind. Christian Science recognizes full well the presence of these evils in daily experience, and it is incorrect to state that it denies the existence of these curses to human happiness and well-being, without further explanation. Such a statement gives your readers the impression that Christian Science is both heartless and dishonest. Christian Scientists have the same problems to meet that others have. If they are sick, they know it. If they cannot pay their bills, they know that as well. They attack their problems, however, as unreal mental experiences, not as stubborn realities.

Send a comment to the editors
NEXT IN THIS ISSUE
Article
The article under the heading "Christian Science Is Built... 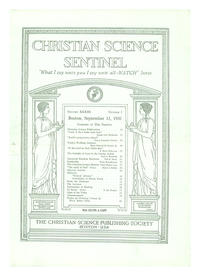