In the year 1915 I came into Christian Science for the...

In the year 1915 I came into Christian Science for the healing of hemorrhages of the lungs, said to have been inherited. I also had a very distressing throat trouble, supposedly caused by singing. I had spent much time and considerable money studying vocal music. This had given me a great deal of pleasure, and to be told I should have to give it up grieved me very much.

I had had three doctors, two of whom were specialists in diseases of the throat. One wanted to operate; another wanted to keep me under treatment for a while to see if he could determine what might give me relief. The third said I could not have an operation because there was nothing in my throat which they would dare remove. By this time my suffering was intense. A friend and business associate, knowing of my suffering, had recommended Christian Science on several occasions, but I had always tried to rebuke him in such a way that he should never speak of it again; however, he did not lose patience.

Send a comment to the editors
NEXT IN THIS ISSUE
Testimony of Healing
It is with much gratitude and joy that I take this means... 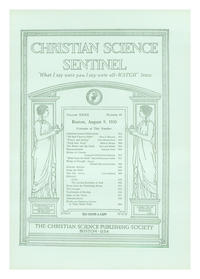