"BUILD a zone of silence around your life each day." This admonition in the form of an anonymous quotation was found one day by a student of Christian Science in an old notebook, and it held for her a volume of meaning. It spoke of the defense which a student of Christian Science each day endeavors to build for himself through right thinking about his relationship to God and his fellow men. It spoke of the way in which right thinking puts to silence the clamor of wrong thoughts which so-called mortal mind tries to pour into human consciousness. This continual silencing of error through the realization of what is true about God and man constitutes a mental fortress of protection against the darts of error, as well as an adequate defense in the hour of battle.

That this protective work is to be done daily becomes very clear to the student of Christian Science after a careful perusal of the writings of our beloved Leader, Mary Baker Eddy. In several places she admonishes her followers to pray daily for themselves. In the Manual of The Mother Church (Art. VIII, Sect. 6), under the caption "Alertness to Duty," she says, "It shall be the duty of every member of this Church to defend himself daily against aggressive mental suggestion." On page 127 of "Miscellaneous Writings" she says, "One thing I have greatly desired, and again earnestly request, namely, that Christian Scientists, here and elsewhere, pray daily for themselves; not verbally, nor on bended knee, but mentally, meekly, and importunately." One cannot fail to perceive the import of these words and the necessity for setting up a defense in one's consciousness against the seeming onslaughts of error. Such protective work handles error as nothing, and thus proves it powerless. The understanding that God, divine Love, is omnipotent and omnipresent, and is reflected in man and the universe, quiets the most apprehensive thought, and brings it peace. In a consciousness thus protected each day, there can be no fear of any evil. 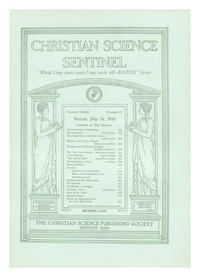