"For the good that I would I do not: but the evil which I would not, that I do." Who has not more or less frequently voiced these words which Paul used when describing the plight of mortals? Who is so unresponsive to the divine call to come up higher that he does not at times become impatient, and perhaps discouraged, at the slow progress he seems to be making out of sinful habits?

Sometimes we hear it said that it is a lack of sincere desire to reform that prevents the fulfillment of the purpose. Where such is the case, permanently good results can hardly be expected. But who that has seen one try repeatedly, and perhaps years, to overcome the liquor habit, the drug habit, the tobacco habit, or some moral weakness or ugly trait of disposition that is exacting its heavy toll of sorrow and sickness—who that has witnessed any such case can doubt the sincerity of the desire to be free from bondage to evil beliefs? 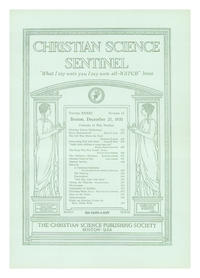