The method of procedure adopted by climbers who make the ascent of Fujiyama has often been observed with a great deal of interest. When being fitted out for the journey to the top of the mountain, they are provided with straw sandals to put over their shoes, as a part of their equipment and as a means of protection to their feet and footwear. However, on the crude way and hard lava beds these flimsy articles soon wear away. In the journey upward the climbers grow weary of trying to adjust them, or else they halt every few moments with a view to replacing their dilapidated and useless straw coverings with others which appear better, even though these have been discarded along the way by other mountaineers. Finally, they too discard their sandals, and climb on unhampered. Indeed, these worn-out sandals, sterwn along the way between the ten "go's" or stations from Subashari, the point from which the ascent is made, to the summit, furnish remarkable evidence of their impracticability as a means of protection or as an aid to progress to the climber.

How many students of Christian Science, in scaling the steeps of human effort to gain the mount of revelation, depend on worthless material sense to assist them in their great journey heavenward? How often, when their own understanding seems to fail them, do they look for assistance to human beliefs or experiences which others may have cast aside as unsatisfactory, only to realize, like the travelers on Fujiyama, that they are but as worthless sandals of straw. Many have had to learn that all such would-be aids prove a hindrance, and that one must press onward toward the goal, looking upward and beyond all mortal limitations, to God alone for guidance and support. 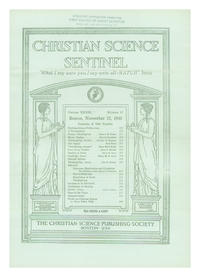