Kindly permit me to refer to the correspondence on Christian Science...

Kindly permit me to refer to the correspondence on Christian Science which appeared in your columns recently. It is admitted by "H." that he is no friend of Christian Science, and he says that his purpose is "to warn people of the falsity of the thing." In order to do this he has set himself the impossible task of proving the teachings of Christ Jesus and the Holy Bible to be false, for it is on these that Christian Science is predicated. The purpose of the Christian Science movement, as founded by Mary Baker Eddy, is "to commemorate the word and works of our Master, which should reinstate primitive Christianity and its lost element of healing" (Manual of The Mother Church, p. 17). I submit that no one is in any need of being warned against such a purpose, but rather that all should be invited to investigate the subject for themselves.

Send a comment to the editors
NEXT IN THIS ISSUE
Article
In that portion of your personal health service columns... 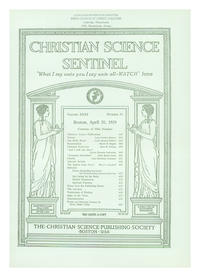