In his opening address at the Presbyterian State Assembly,...

Thomas A. Wyles, Committee on Publication for South Australia,—Adelaide

In his opening address at the Presbyterian State Assembly, as reported in the Register, the moderator criticized Christian Science, and made certain statements which I should be glad if you would allow me briefly to correct. The minister stated that, according to Christian Science, there is no such thing as pain, suffering, sin, or death, and that consequently the answer of Christian Science to the question, "What must I do to be saved?" is, "There is nothing to be saved from." Christian Science, however, makes no such statement; and the following quotations from the Christian Science textbook, "Science and Health with Key to the Scriptures" by Mary Baker Eddy (p. 472), will explain the minister's misunderstanding: "All reality is in God and His creation, harmonious and eternal. That which He creates is good, and He makes all that is made. Therefore the only reality of sin, sickness, or death is the awful fact that unrealities seem real to human, erring belief, until God strips off their disguise. They are not true, because they are not of God." Did Jesus treat sin and sickness as realities, that is, creations of God? If so, he acted in defiance of God in destroying them. Christian Science certainly accepts the only basis of salvation, namely, "Believe on the Lord Jesus Christ, and thou shalt be saved;" but salvation through Christian Science is not a future hope but a present possibility, attainable in proportion to our conquest—according to the example of Jesus—here and now over sin and sickness. The Christian Scientist, therefore, daily strives to prove his religion in his activities and health.

The minister's objection to the success of Mrs. Eddy as an authoress is rather humorous; for it is surely not a crime to be successful. Our Master said, "Seek ye first the kingdom of God, and his righteousness; and all these things shall be added unto you." Mrs. Eddy led a simple and beautiful life of self-sacrifice and service for others, and most of her fortune was left to the Christian Science Cause for the good of humanity. I regret that the minister should have overlooked the Golden Rule and the dignity of his high position in the criticism of a brother-denomination. Christian Scientists would prefer that "by their fruits ye shall know them."

Send a comment to the editors
NEXT IN THIS ISSUE
Article
Your correspondent is again mistaken in his conclusion... 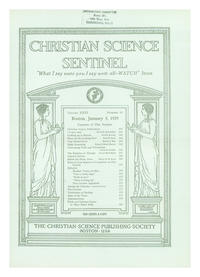