There is, perhaps, no subject that gives men more concern than that of right decisions. Thousands of years ago Joel declared, "Multitudes, multitudes in the valley of decision: for the day of the Lord is near in the valley of decision." From that day to this the difficulty has been that while mankind has recognized the necessity of making right decisions, it has forgotten all about "the day of the Lord" being near! Endeavoring to decide from the standpoint of human belief, it has stumbled along through many an uncharted way, reaping the result of its own mistakes.

Christian Science, however, dissipates the difficulty here as in all things else. Teaching as it does that all questions must be referred to the divine Mind in order to obtain right answers, it opens the way at all times to perfect decisions. Laying hold of Joel's viewpoint that "the day of the Lord is near in the valley of decision," it starts with the assurance that, as Mrs. Eddy says in "Miscellaneous Writings" (p. 65), "Every question between Truth and error, Science must and will decide." The Christian Scientist therefore knows that he is continually called upon to divide between Truth and error. Nothing is ever presented to his thought which demands a decision but it necessarily involves such separation, and he must invariably rely on Science if he is to separate wisely and well. 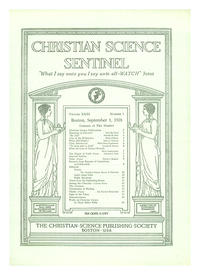