Success of The Christian Science Monitor

It was Mrs. Eddy who, through the channels of The Mother Church, gave to the world The Christian Science Monitor. She no doubt prayed for it; and through conforming her thought to the Mind that was in Christ Jesus, and letting God's thought direct her, her prayer was answered. Thus it is that one of the greatest needs of humanity has been met, and the world can now show a daily paper from which reference to crime is largely excluded, where constructive news is exploited almost exclusively, and where that which uplifts thought predominates throughout.

The Christian Science Monitor is a success because it is beginning to fulfill its mission, which Mrs. Eddy defines thus in "The First Church of Christ, Scientist, and Miscellany" (p. 353): "To spread undivided the Science that operates unspent;" and she states, "The object of the Monitor is to injure no man, but to bless all mankind." Because of its object, our daily paper corrects erroneous conditions, impartially stands for what is best, nationally and internationally, and at every crossroad where there is a choice between right and wrong in daily affairs, strives to take the higher road, whatever human opinion may be saying. Moreover, the Monitor is a blessed messenger bringing wholesome, happy thoughts to mankind; and it is founded on the best possible business basis, namely, that of true service. 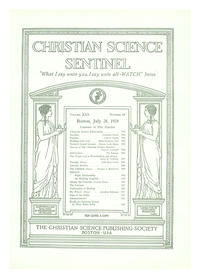