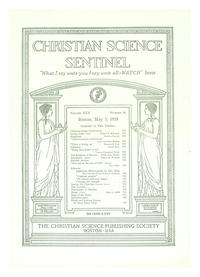 One of the curious misconceptions affecting the actions of the sons of men is the belief that liberty and disregard of law may mean the same thing.
Article

Not long ago someone within hearing of the writer made use of the expression: "He is a miser, and miserable.
Article

"There is lifting up"

One of the great Bible verities that mankind has largely overlooked or ignored, has been brought to light and to practical demonstration by that inspired "key" to the Scriptures, "Science and Health with Key to the Scriptures" by Mary Baker Eddy; and this valuable truth is concerned with the blessings promised to men throughout the Old and New Testaments.
Article

While crossing a busy thoroughfare, a mother and her little daughter were caught in a heavy traffic jam.
Article

"Bring them hither to me"

In our search for Truth we have all been tempted at times to feel utterly unworthy of divine Love; but it is then we may be restored, if we will only turn our thought to the contemplation of one of the many instances which are recorded of the tenderness of Jesus towards mankind.
Article

The Kingdom of Heaven

MARVELOUS Mandate—the words of Christ Jesus, "The kingdom of God is within you"! Not far and beyond us; not a distant and unattainable thing; not a happy land to be found only after we have passed through the beliefs of sickness and death; but a joyful and present blessing, something at hand, a gift available for each and every one of us now!
Poem

In a recent issue a local evangelist was reported as saying:...

J. Latimer Davis, Committee on Publication for the State of Towa, - Des Moines

In a recent issue a local evangelist was reported as saying: "Page Mary Baker Eddy.
Article

In an article published in your paper, a reverend doctor...

Frank J. Linsley, Committee on Publication for the State of Connecticut, - Hartford

In an article published in your paper, a reverend doctor continues his.
Article

Your correspondent writing in a recent issue under the...

Lewis B. Sawyer, Committee on Publication for the State of Missouri, - St. Louis

Your correspondent writing in a recent issue under the caption, "Random Thoughts," is probably right when the states that "it will be of interest to Jews in and out of the Christian Science church to read the statements made in a published article" by a man "who has recently withdrawn from membership in The Mother Church.
Article

In a letter on Christian Science in your recent issue, which...

In a letter on Christian Science in your recent issue, which the writer invites me to refute, I can find nothing sufficiently definite to require refutation.
Article

A writer in a recent issue stresses the social necessity of...

A writer in a recent issue stresses the social necessity of compassionately considering the afflictions and woes of humanity.
Article

The remarks of your able correspondent, "An Old...

The remarks of your able correspondent, "An Old Fogey," on the subject of administrative reform appearing in a recent issue, will be read with much interest by all.
Poem

To gaze upon a rose,—"the smile of God,"*—To mark its outlines fair, its fragrance rare,Awakes within the heart a growing sense Of wonderment at God's omnipotence.
Editorial

From the time that Mrs.
Editorial

When John the Baptist was proclaiming himself as "the voice of one crying in the wilderness, Prepare ye the way of the Lord, make his paths straight," there were certain solders who came to him asking what they should do in order to bring forth "fruits meet for repentance.
Editorial

"Wait on the Lord: be of good courage, and he shall strengthen thine heart: wait, I say, on the Lord," says the Psalmist; and in Isaiah it is written, "Trust ye in the Lord for ever: for in the Lord JEHOVAH is everlasting strength.
Article

It is with unspeakable gratitude that I testify to having...

It is with unspeakable gratitude that I testify to having found the way out of inharmony through the living truth.
Testimony of Healing

For several years a thought had now and then presented...

For several years a thought had now and then presented itself to me that should I ever be sick, I could always be healed in Christian Science; for I had long realized that medicine had no power to heal, since there is no real power in matter, but only the seeming power which mortals gave it.
Testimony of Healing

"Bless the Lord, O my soul: and all that is within me, bless his holy name.
Testimony of Healing

Several years ago I Seemed to become engulfed in the...

Several years ago I seemed to become engulfed in the darkness of despair, despondency, and consequent inactivity.
Testimony of Healing

I took up the study of Christian Science for physical...

I took up the study of Christian Science for physical healing.
Testimony of Healing

During the winter of 1918 I was called to Washington to...

During the winter of 1918 I was called to Washington to engage in War Camp Community Service work.
Testimony of Healing

It is a joyous privilege to express my gratitude for the...

It is a joyous privilege to express my gratitude for the many blessings that have come to me through the study and application of Christian Science.
Testimony of Healing

Mere words will never be adequate to express my gratitude...

Mere words will never be adequate to express my gratitude for Mrs.
Testimony of Healing

I took up the study of Christian Science in 1895 for physical healing, everything else having failed to give me relief.
Testimony of Healing

Christian Science has been and is more to me that I can...

Christian Science has been and is more to me that I can express in words; and it is a duty as well as a privilege to testify to what it has done for me.
Poem

Announcement is made of a revision in the prices of the morocco-bound small pocket editions of Mrs.