"Greater works than these"

There is a notable feature in connection with the testimonies of healing that are given in Christian Science churches and periodicals which can hardly fail to impress the listener or reader, and it is that, while the beneficiaries are abundantly grateful for their physical healing, their gratitude for the spiritual inspiration and enlightenment which Christian Science is bringing to them is declared to be far greater. This brings to mind the words of our Master, "He that believeth on me, the works that I do shall he do also; and greater works than these shall he do."

Christ Jesus came to redeem mankind from its belief in existence separated from God, and from the illusions which attend that false belief; but, while he knew that the spiritual needs of men were greater than the physical, he naturally had to begin his work at the point where they were sufficiently ready to be redeemed, and that was at the point of physical healing. He restored to health and strength all who came to him, in confirmation of the truth of his teachings. But although his works may have seemed mainly to be concerned with a physical sense of life, he knew that he was laying a foundation which time could not wear away, a foundation upon which his church would sometime be built, and against which "the gates of hell shall not prevail." 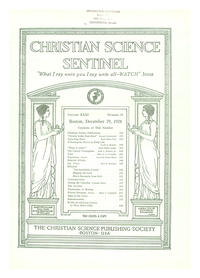