THE Scriptures tell us concerning the nativity of Jesus the Christ that after he was born he was cradled in a manger. We read in the second chapter of Luke that Mary "brought forth her firstborn, son, and wrapped him in swaddling clothes, and laid him in a manger; because there was no room for them in the inn."

The inn was filled with those who had come to their own city to be taxed, according to the decree of Caesar Augustus. And such an event was likely to be made an occasion of great moment in the lives of the people, who in those days seldom made such journeys except at the time of religious feasts, when, naturally, a solemn atmosphere prevailed. It may even have been an occasion of considerable festivity, with families reunited, but at any rate all would be filled with emotions of one sort or another—some rejoicing, some sorrowing. No doubt there would be murmurs of discontent from some, to be silenced by the more religious, who patiently hoped for the promised Messiah who would free them from Roman domination. A mighty and glorious king would come from God—some day—to lead them on to victory! Meanwhile, they would barter and bargain, feast and keep the fast. Their hopes and ambitions were as a rule densely material. There was little room aopparently for aught else. 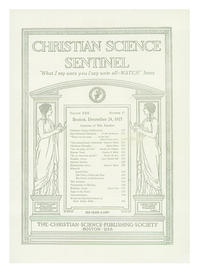