In the directions as to what should properly be taught and what should not, contained in his letter to his friend Titus, Paul, after touching upon the unworthy acts in which all engaged before the coming of the Saviour, speaks of the salvation which has come to them in these words: "Not by works of righteousness which we have done, but according to his mercy he saved us, by the washing of regeneration, and renewing of the Holy Ghost." Apparently, Paul looked upon the conversions of the followers of Christ as a process of regeneration, of washing by the Spirit, whereby the false views of life were exchanged for the true and materiality gave way before spirituality.

Jesus used the word "regeneration" in a similar manner. When speaking to his disciples of the difficulty of the materially-minded in finding entrance to the kingdom of heaven, he declared that those who had followed him "in the regeneration" should receive their sure rewards. Obviously, Jesus' use of the term "regeneration" was in relation to changes in the thought of his disciples from a material to a spiritual basis; that is to say, because, through their acceptance of his teachings, they had come to look upon God as the infinite Father of all and upon His creation as spiritual and perfect, partaking of none of the claims of matter. Christian Scientists look upon the process of regeneration as the new birth, the relinquishment of the false and material concepts of life and existence for the understanding of God as Spirit, and of His creation, the infinite universe, as spiritual. This, it will be observed, precludes the possibility of accepting matter as real; in fact, it denies in toto the seeming reality and entity of the so-called material creation: it posits all reality with God and His universe. 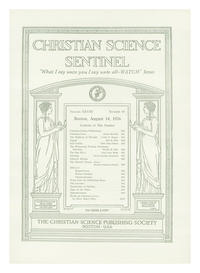