When Christian Science was first mentioned to me, I was...

When Christian Science was first mentioned to me, I was in sore need of something to lift me out of despondency and depression. I was connected with an orthodox church and entered into all of its activities, but still I did not know God as good, or as divine Principle; and I was under doctors and specialists for the treatment of various ailments. My hair had fallen out until I had very little left. A specialist said this trouble had been caused by grief at the loss of my father. Through the systematic study of the Bible and of "Science and Health with Key to the Scriptures" by Mary Baker Eddy, and the aid of the Christian Science Quarterly, I quickly discovered I was worrying. The study of Exodus also revealed that I had more than one God. This was such a revelation to me that in three weeks more my hair started to grow, and in a very short time it was as long as it ever had been.

Also, I suffered from rheumatism, especially in my feet, and there were days when I could not get about. This trouble was supposed to be hereditary. I also had catarrh of twenty years' standing, skin eruptions every spring and fall, indigestion, and weak throat. These ills all vanished through reading the Lesson-Sermons and putting into practice the little I understood. I should also like to say that shortly after becoming interested in Christian Science I was poisoned. My relations feared I would pass on; but I refused to have a doctor, so a practitioner was asked to help me. This he loveingly did, and in a few days I took a three-mile walk. 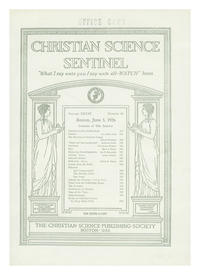